Beside doing robberies alone, you can perform robberies with another player, by following these simple steps.

Stores are different from each other, each store has its own icon. For example, a 24/7 has the marker of a Drink

, or the Caligula's Casion has the marker of a Dice

. For this tutorial, we'll rob the 4 dragons casino, which is marked with a Triads icon

. Once you find a store, enter it using it's entrance marker.

Each store has a safe which can be robbed. That safe can be found usually near the store clerk bot, but you can use the textdraw on your left, which shows the distance between you and that safe. The safe, the clerk and the textdraw looks like 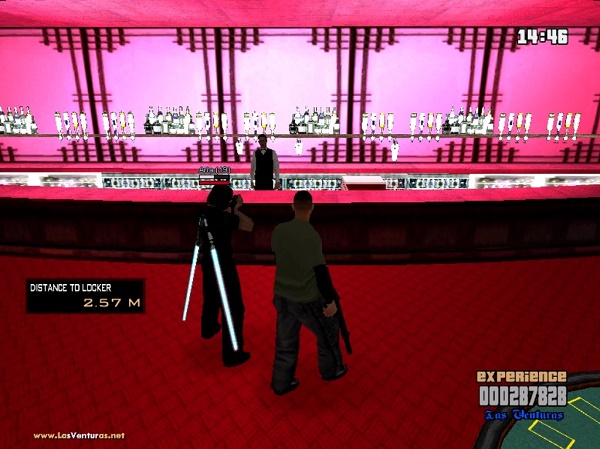 Once you find the safe, proceed to the next step. Bear in mind that the clerk bot isn't the same in each store.

This is where you perform the robbery. To do the group robbery, each player has to do something:

Player 1: He should aim at the store clerk bot, like aiming at a normal player.

Player 2: He should go to the checkpoint near the safe, then press left ALT or use the command /robstore ONLY when Player 1 is aiming at the store clerk bot.

Like a normal robbery, it takes about 20-25 seconds if the safe is secured, and if opened, 15 seconds. Player 1 should keep aiming at the store owner all that time, or the robbery will fail.